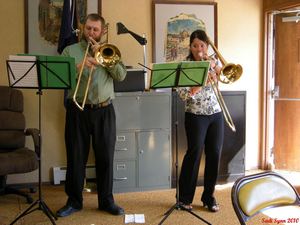 As part of its Summer Festival, two members of the Kenai Peninsula Orchestra, Mary Simondsen and Eric Simondsen will be coming to Seldovia on August 9 to play a trombone duet  at a lunch time concert for Seldovians.   According to Laura Norton, festival director, “…this is the first time we in many years that we have included a community outside of Kenai, Soldotna & Homer.” This is very exciting!!!!

The concert will be at the  City Multi-purpose Room right after the Senior lunch. Join us for dessert!

The Concert is expected to begin around 12:30 …

This will be a free concert open to the public, with donations to the Kenai Peninsula Orchestra at the door.  Please contact Susan Mumma for details… 234-7164

What a fantastic afternoon!!!!!

Folks from Seldovia enjoyed the concert and hope that these folks will return soon!!

The Simondsen’s enjoyed a bit of Seldovia wildlife!!!

July 18 a not nine but 14 piece band came to the Seldovia Arts Council sponsored event.  Three bands, The Old Believers, Congratulations, and Red River made a combined band on the Susan B. English Stage.  The young musicians, played guitars, key boards, drums, french horn, and trumpet, plus smokin’ vocals.  They  played original tunes and songs by each of the groups and made a smorg-board of sounds our local crowd to enjoy.  Nelson Kemp and Keeley Boyle both Alaskans, returned home as part of this tour and like the pied piper lead the group through several Alaskan cities.

Thanks to Joe Rizzo of Triumpherate Theater in Kenai for writing a Rasmussen Foundation Travel Grant to make the trip possible for the group.   Thanks to Seldovia Arts Council members for set up and clean- up. Thanks to SVT for the use of their vans for traveling around Seldovia, and to many folks in our community

for providing a pot-luck and breakfast treats. And last but not least thanks to the Kenai Peninsula Borough School District, specifically Susan B. English School for allowing the use of the facility on a rainy, blustry day…we were warm and dry.

Thanks to everyone..The kids were a part of a grant to encourage young people in the arts and they were very appreciative.  They said that Seldovia was the nicest town they have every been in.