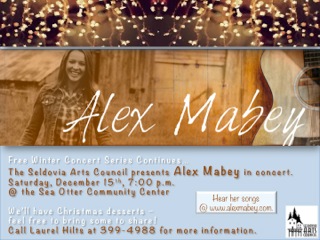 This second concert in the Seldovia Arts Council’s Winter Series will be held at the Sea Otter Center  December 15.  It will be a Christmas -themed event with a Christmas food (dessert) potluck during the intermission. Bring some of your holiday favorites and wear some jingle bells.  Starts at 7 PM.

“Alex Mabey? More like Alex Absolutely!”…a quote she received from a judge while auditioning to sing the National Anthem at a baseball game when she was twelve. Alex was born and raised in the mountains of Washington State and has an indisputable sound and message which speaks to people in the way music should. “Not only does she have captivating melodies and lyrics but there is a message behind each song… touching the hearts of both young and old.”  She started writing songs on her guitar and piano at the age of thirteen, finding her inspiration anywhere from childhood memories of mud-pies and cooties to the smiles and tears which life has brought to her and to the people around her. Performing her songs for her friends and family around a campfire soon developed into a fan-base in her community. She then formed a band in 2007 and since then has created 2 full CDs and a demo of original songs. She has performed at many events in the Northwest. She recently opened for Wynonna Judd and Craig Morgan and has also performed at numerous benefit concerts, showcases, county fairs, and of course sitting on the porch of the small town general store with her guitar case open and a sign saying “CASH for GAS!” The past year she lived in Nashville, TN where she pursued her country music career as a Singer/Songwriter and also attended Belmont University where she studied Music Business and Songwriting. She co-wrote, played many writer’s venues, and made connections with people who have helped her grow as an artist and songwriter.

Her dream to be on stage singing in front of thousands of people is for one purpose only and that is to touch the lives of people in any way she can. She says, “God is the one who gives me my songs. I’m just the girl lucky enough to sing them!”  She continues, “I want to sing my songs to people who want to hear them whether it’s to an arena full of people holding up their cell phones or just to the people who walk by me as I’m playing on the sidewalk. God is taking me on a journey and I don’t know where it will all end or how I will get there. All I know is when I am singing my songs I am happy… and if that makes other people happy I’ve done my job.”  She wants to write your favorite song to rock out to with your friends, the song you play when you’re driving away from home to start your life, the song that you cry to when you’ve just had your heart broken… songs that you listen to and say, “That’s so ME.” She writes music for YOU. So sit back, listen, and enjoy! 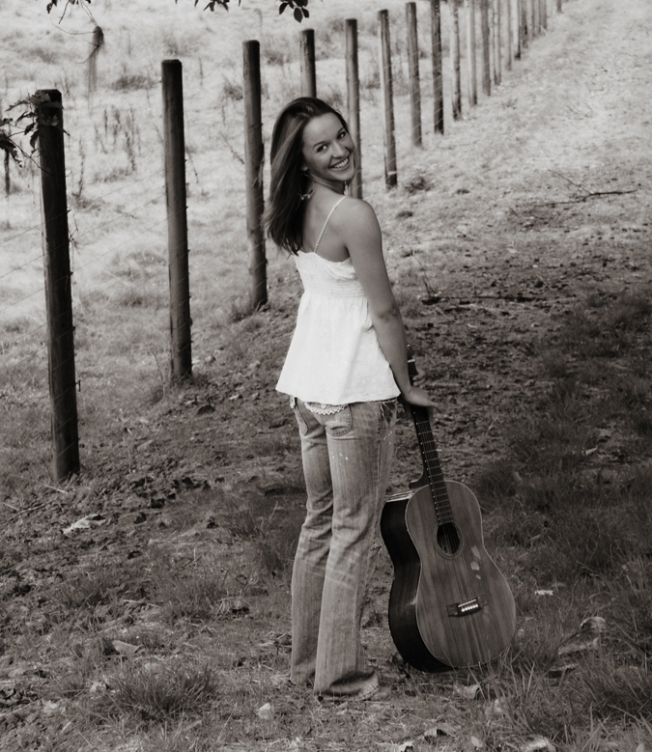